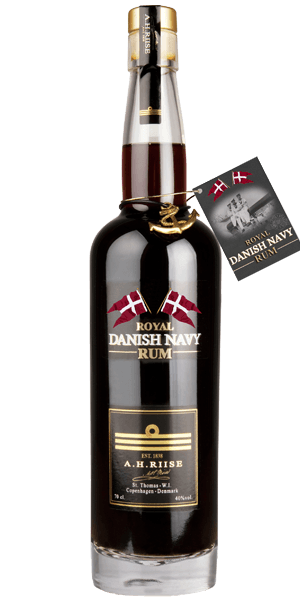 This Danish Navy Rum has been designed and produced in celebration of a significant Danish entrepreneurs, pharmacist and councilor Albert Heinrich Riise, who lived and worked in the former Danish West Indian Islands (now U.S. Virgin Islands) from 1838 to 1878. Riise created the Royal Navy Rum and delivered it to the navy vessels at the port of Charlotte Amalie in the West Indies during his years there to give the Royal Navy sailors a punch of confidence.

A.H. Riise Danish Navy Rum is the re-creation of the old recipe and is a combination of up to 20 years old Rum distillates. It is slowly fermented in the traditional Pot Still method, with 85% alcohol strength, which is later diluted. The Rum is hand blended in small batches and isn't chill filtered, nor is there any added caramel. You can use this spicy dark Rum with strong fruity elements as a substitute for Pyrat XO.

The Flavor Spiral™ shows the most common flavors that you'll taste in A.H. Riise Danish Navy Rum and gives you a chance to have a taste of it before actually tasting it.