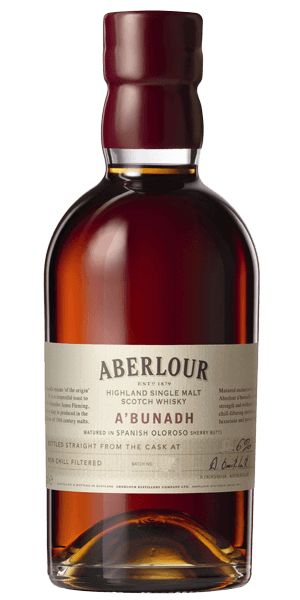 Aberlour A’bunadh is made in batches, and each batch is made by hand. It’s a cask strength Scotch Whisky that has achieved cult status among Whisky connoisseurs (and others). In Gaelic, A’bunadh means The Original, it’s a homage to Aberlour’s founder, James Fleming, produced using traditional methods without chill filtration or other modern processes. This fantastic Speysider was matured in Spanish Oloroso Sherry butts, and comes with an exceedingly high ABV at 61.2%. Powerful, POWERFUL.

The Flavor Spiral™ shows the most common flavors that you'll taste in Aberlour a'Bunadh Batch 56 and gives you a chance to have a taste of it before actually tasting it.

Hilson, Jun 12, 2019
Got it from a relative. Others loved it I thought it was okay. Tastes young

Greg, Oct 17, 2018
A’bunadh is a delicious full flavor dram that carries the oloroso fruit notes well. The cask strength abv is not for the faint of heart nor the novice. Best with a splash of spring water to open up the complexity of flavors and temper the “heat.” Enjoy with friends for a tasting as a late offering. Goes nicely with rich dark chocolate (72%+) or a Montecristo Robusto.

David, Oct 12, 2018
Smooth and mild with just a hint of the cask. It goes great after a heavy meal or with a cigar.

Luiz, Jan 8, 2018
Strong, yet flavorful and smooth. Best with some water

Paul, Oct 12, 2017
A good whiskey, but the bottle I had was not as fantastic as some of the other Aberlour bottles I have had.

Fredrik, Sep 4, 2017
This is my favourite scotch. The body and smokeiness together make up one hell of a dram. A must have.
Load more reviews