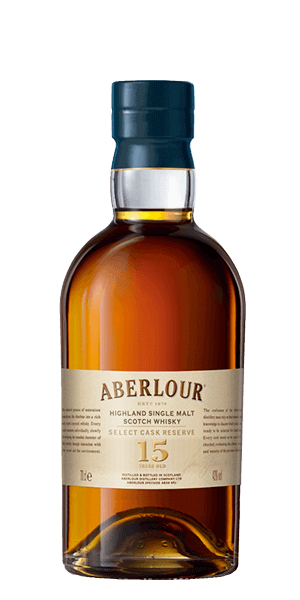 The “regular” Aberlour 15YO Whisky is relatively easy to find … but that not what we are talking about here. Hey, all Aberlours are really good. They’re aged in a combination of ex-Boubon and Sherry casks and filled with all of the glorious Speyside sing-malt loveliness one would expect. But this is Aberlour 15 YO Select Cask Reserve, so there is a difference, and it’s a classic lesson in economics.

You see, this product was originally made for the French market where they love great Whisky, but they want a thicker body and more luscious mouth feel. In other words, they like the good stuff and are unwilling to compromise when there is a lot of great alternative Cognac all over the place. So Aberlour selects the best of the 15YO lot each year for the Select Cask Reserve so that they can sell more successfully in that market. All that makes Aberlour 15YO Select Cask Reserve EXACTLY our kind of dram—and hard to get in the wild—so grab a few bottles before those greedy continentals wise up and take it all back for themselves.

SmartAss Corner
The Aberlour labels proudly claim that they were founded in 1879. But a distillery of the same name has been located on the same site there since 1826. The official company “legend” and “story” go all the way back to the Druids for goodness sake, but skip the distillery’s 18th century history and pick it up again in the 1900s, adding a bit of mystery, don’t you think? I suspect a bit of distasteful legal wrangling.

The Flavor Spiral™ shows the most common flavors that you'll taste in Aberlour 15 YO Select Cask Reserve and gives you a chance to have a taste of it before actually tasting it.

Finish
Smooth with understated spice and a hint of lingering sweet

Piotr, Mar 18, 2018
I expected more. Very nice, sweet nose. Taste is not sweet. Finish could be longer. The smell is promising but taste and finish are a bit disappointing.